A Brief History of Hanover Crescent

Towards the end of the 18th Century Brighton was attracting attention and many believed that the farm house the Prince Regent was turning into The Royal Pavilion would establish Brighton as a desirable place to live.

Henry Brooker, a well known local builder, decided there was money to be made in developing houses to rent to meet the demands of the people from London who wanted somewhere in Brighton. He started to look for suitable sites and found one on the road to Lewes. It was owned by a group of people who had purchased the land in 1803, and like Brooker they thought they could make money from housing.

In about 1814 they agreed to develop the land with Brooker as principal builder and manager. Brooker appointed Wilds and Busby, the well known local Architects, to design the façade of a grand crescent of houses to be called Hanover Crescent. At that time Wilds lived locally and it is believed that Wilds and Busby used one of the Hanover Crescent Lodges as their office. 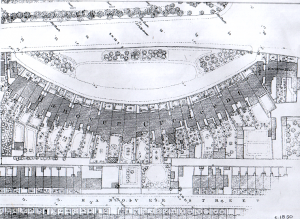 There were to be 24 houses. The plan was to lay out the road and the position of the façades only, and this work was completed in 1822. Like many developments today this was a speculative development.

Each plot was sold as a shell so the owner could have the house built and finished internally to their specific requirements.

Henry Brooker was determined to make the Crescent an exclusive road and had Lodges built at each end with gates. He laid out gardens to the front behind a flint wall. Each tenant was required to pay an equal share of the cost of maintaining the gardens, road and footpath. Detailed titled deeds were drawn up and these “rules” survive to this day.

A residents committee was established with Henry Brooker as Chairman, and in fact he lived at No.14 for some 25 years. He also owned the two Lodges where the gate keepers and odd job men lived. No doubt he also collected the money for the gardens and roads.

Many of the plots were purchased at favorable terms by the group who originally owned the land. Others were sold to local businessmen for the sum of £600 each. The majority were purchased as investments to rent out.

There is an entry in the Brighton Gazette dated the 17th July 1823 offering three of the completed houses for sale; unfortunately it does not give a price. However it says “for the benefit of creditors” so it looks as though someone ran out of money.

Brighton had begun to develop northward towards the Lewes Road by 1822. The working class area of Carlton Hill, with its small tenement houses, abundance of public houses, workshops and slaughterhouses, had been the most northerly development until 1795, when the Percy Almshouses were built in a rural setting at the junction of Lewes Road and Elm Grove.

It was in the area between Carlton Hill and the almshouses that Henry Brooker decided to build a middle class crescent of houses. Work on the houses started in 1809 and was completed by 1822, with other substantial villas developing along the main road at the same time. In 1814 Henry Brooker employed architects Wilds and Busby to design a facade for the Crescent, with building lots being sold to individuals, enabling the rest of the house to be designed to the purchaser’s own requirements.

When complete Hanover Crescent was a semi-circle of twenty four houses with bow fronts, shell motifs and Corinthian and Ammonite pilasters, though they were not of a uniform design. The two lodges at each end of the Crescent were single storey buildings with Tuscan columns and pediments. Gates and iron railings enclosed the Crescent in front of the semi-circular carriage drive. Title deeds describe the erection of gates “to keep our road a private road for the exclusive use and enjoyment of the tenants and occupiers free from horse, cattle carts and other carriages”. Tenants were to pay equal amounts for the maintenance and upkeep of the grounds.

During the construction of the Crescent Wilds lived at Richmond Lodge with his builder’s yard on the Level opposite his house. Charles Burchett, a builder at No.22 Richmond Buildings whose private residence was at No.1 Southover Street, was involved with the interior design of the Crescent.

In 1821, just as the select development of Hanover Crescent was being completed, the Phoenix Brewery opened on land stretching from Albion Hill to Southover Street. The Level recreational area was laid out opposite the Crescent and construction of the new parish church of St. Peter’s was started. The Crescent, a select development for middle class residents, was now in a more socially mixed neighbourhood, and this would have had an effect on the type of occupant.

Hanover Crescent initially attracted well known residents such as Horace Smith, the writer and poet, who lived at No.10 from 1826 to 1840. His house was a meeting place for the intellectual society of Brighton and among his friends were Dickens and Thackery. He was succeeded in this house by Samuel Hood, a physician and father of the first Viscount British Admiral.

In 1851 George Brown, a well known cricketer of the time, lived at No.10. He was the keeper of the Hanover Cricket Ground, now Park Crescent with its entrance gate in the centre of the flint wall in Union Road. In 1839 Mr Henry James lived at No.11, but by 1844 Roland Hill, the originator of the penny post and the chairman of the London & Brighton Railway Company, lived there. Henry Brooker himself lived at No.14 for about 25 years, after which the house was purchased by Elizabeth Guinness, a brewer’s wife and at one time Lady Mayoress of Dublin.

John George Bishop, writer of local history and editor of the Brighton Herald, lived at No.15, which became the official residence of the Vicar of Brighton from 1839-1882. The Crescent was home to no less than fifteen persons from 1822-1907. G F Attree Junior, auctioneer and estate agent, lived at No.8 from 1884-1906, the first resident to have a telephone. When the house was sold it was combined with No.9 to make Hanover House, which became St Paul’s Convent School run by a Mother Superior from Belgium.

Charles Hammond bought No.18 Hanover Crescent in 1824, but his stay was short lived as he was declared bankrupt and the property sold at auction on the premises on 13 April 1826. The description of the contents gives an insight into the furnishings of that time:

The house was purchased by William Henry Klyne, a retired Receiver of Taxes.

Mr. Smith Hannington of the drapery trade left his house in Hanover Crescent to Mr Samuel Hannington in 1826, and later it was occupied by an accountant of Hanningtons. No.19 was bought by the Brighton Co-operative Society in 1929, which they extended at the rear to form a dairy, supplying milk to the area until quite recently. 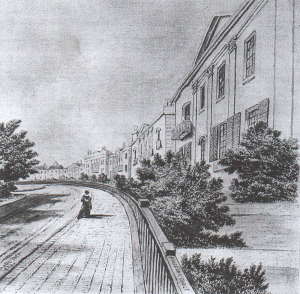 Of the 24 houses in Hanover Crescent on census night, 30 March 1851, 23 were occupied and one was empty. One property had only a maid in residence and therefore only 22 households had a head of household. Of the 22 heads of household 10 were married men, 3 widowers, 2 widows, 6 single females and 1 married female. No females were marked on the census as having an occupation other than fundholders, annuitants and a retired governess. Some of the residents of Hanover Crescent appear in the Court Directory, indicating a certain wealth and standing. Of the 22 heads of household none were born in Sussex. Most of the heads of household were retired or fundholders so they did not have to earn a living and were therefore able to live on the edge of the town. Each family had at least two servants and possibly had other staff who lived out, as several women in nearby Hanover Street and Hanover Terrace state their profession as housemaids.

Manage Cookie Consent
To provide the best experiences, we use technologies like cookies to store and/or access device information. Consenting to these technologies will allow us to process data such as browsing behaviour or unique IDs on this site. Not consenting or withdrawing consent, may adversely affect certain features and functions.
Manage options Manage services Manage vendors Read more about these purposes
View preferences
{title} {title} {title}